Does Reclassification Change How English Learners Feel About School and Themselves? 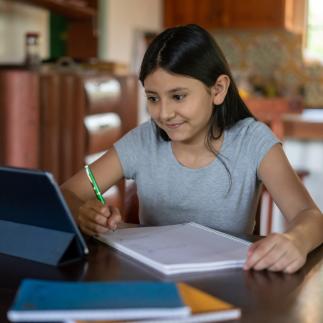 Reclassification can be an important juncture in the academic experience of English learners (ELs). Literature has explored the potential for reclassification to influence academic outcomes like achievement, but its impact on social-emotional learning (SEL) skills, which are malleable and important for long-term success, remains unclear. Using a regression discontinuity design, we examine the causal effect of reclassification on SEL skills (self-efficacy, growth mindset, self-management, and social awareness) among fourth to eighth graders. In the districts studied, reclassification improved academic self-efficacy by 0.2 standard deviations for students near the cutoff threshold. Results are robust to alternative specifications and analyses. Given this evidence, we discuss ways districts could establish practices that instill more positive academic beliefs among ELs.

Research increasingly demonstrates that students’ attitudes, perceptions, and emotions—often referred to as social-emotional learning (SEL) skills—are salient factors in determining short- and long-term academic outcomes.1 SEL skills consist of a wide range of attitudes, perceptions, and emotions that students need to meet academic goals, build positive relationships, make good decisions, and express empathy for others.2 As an example of the importance of SEL for long-term academic outcomes, students are unlikely to attend and persist in college if they cannot overcome setbacks and show the determination to meet long-term goals.3 For English Learners (ELs), resilience stemming from positive attitudes and perceptions is especially important because they face the daunting task of mastering the same academic content as their peers while concurrently developing their skills in English.4

Relatively little is known about SEL among ELs, especially how policies that affect ELs influence their social-emotional outcomes. Some evidence exists to suggest that ELs have lower scores on SEL measures because of a variety of factors, including lower expectations from peers and educators as well as the stigma that comes with the EL label.5 Further, lower self-efficacy among ELs is associated with lower achievement and slower academic growth, possibly contributing to achievement gaps and the rate at which they close over time.6 Factors associated with reclassification, such as shifts in academic content and delivery, could further affect SEL skills as a student transitions to a reclassified EL or a former EL. Understanding the causal effect of EL status on SEL outcomes could provide educators and policymakers with needed information on the potential consequences of reclassification, including how EL status makes those students feel about their own academic capabilities.

In this brief, based on a longer article recently published in Educational Evaluation and Policy Analysis,7 we examine the effect that reclassification has on SEL outcomes for ELs using data from several of California’s CORE districts. The proportion of ELs in all three districts exceeded the state average (i.e., ELs constituted more than 21.6 percent of total enrollment) in the year studied. The results presented in this brief focus on a group of 10,637 ELs who were between fourth and eighth grade and were formally classified as ELs in the 2012–13 school year. We tracked reclassification in the following school year (2013–14) and gauged the subsequent impact of reclassification via student SEL surveys that were completed in 2014–15.8 Specifically, we used a binding score regression discontinuity (RD) design to examine how falling just above or below cut scores on the various tests used to determine reclassification affects students’ SEL outcomes. The RD design allows us to make the assumption that students who are just above and below the cutoff scores required for reclassification are similar to one another except for the fact that their scores randomly fall above or below an objective test score threshold.9

We derived our outcome measures from student surveys measuring SEL skills across four social-emotional constructs. The SEL survey administered to students in CORE districts annually measures self-management (nine items), growth mindset (eight items), self-efficacy (four items), and social awareness (eight items). Students respond to items by choosing from a 5-point Likert scale. The same survey was implemented across all students and districts in our sample in the given school year. See Table 1 for a summary of each construct and a sample item that falls under each construct. 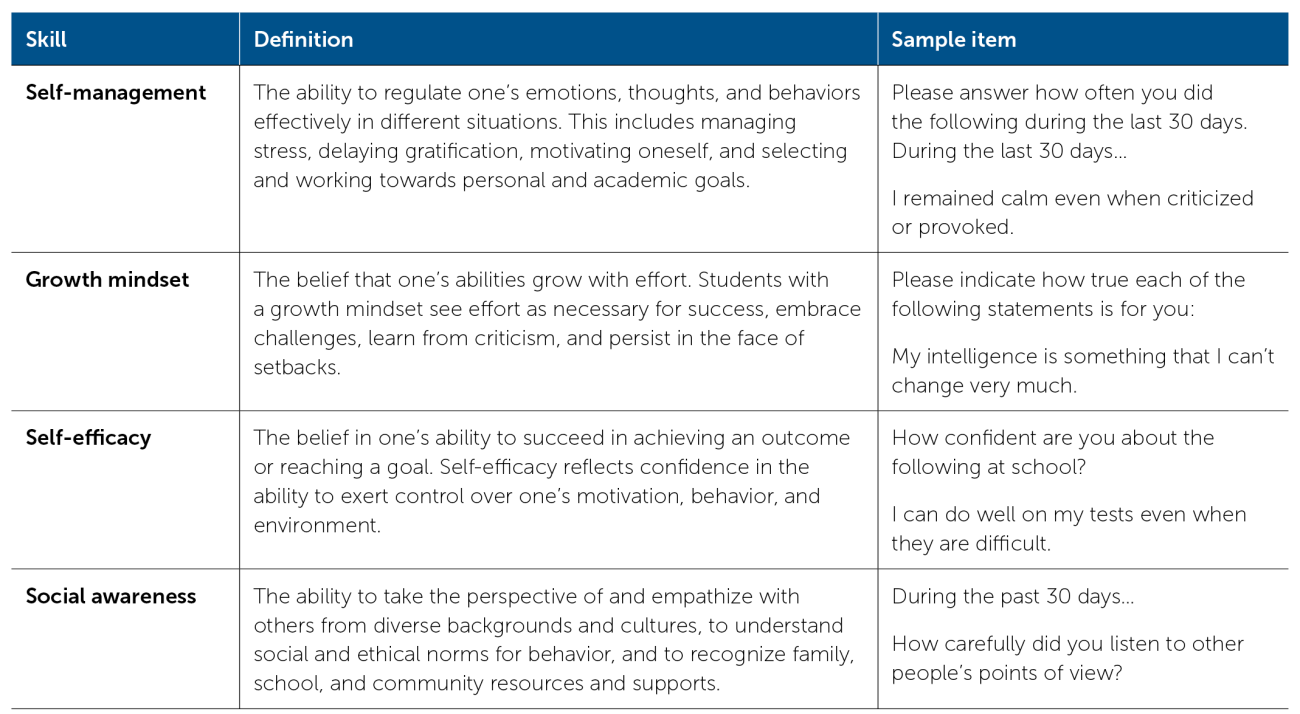 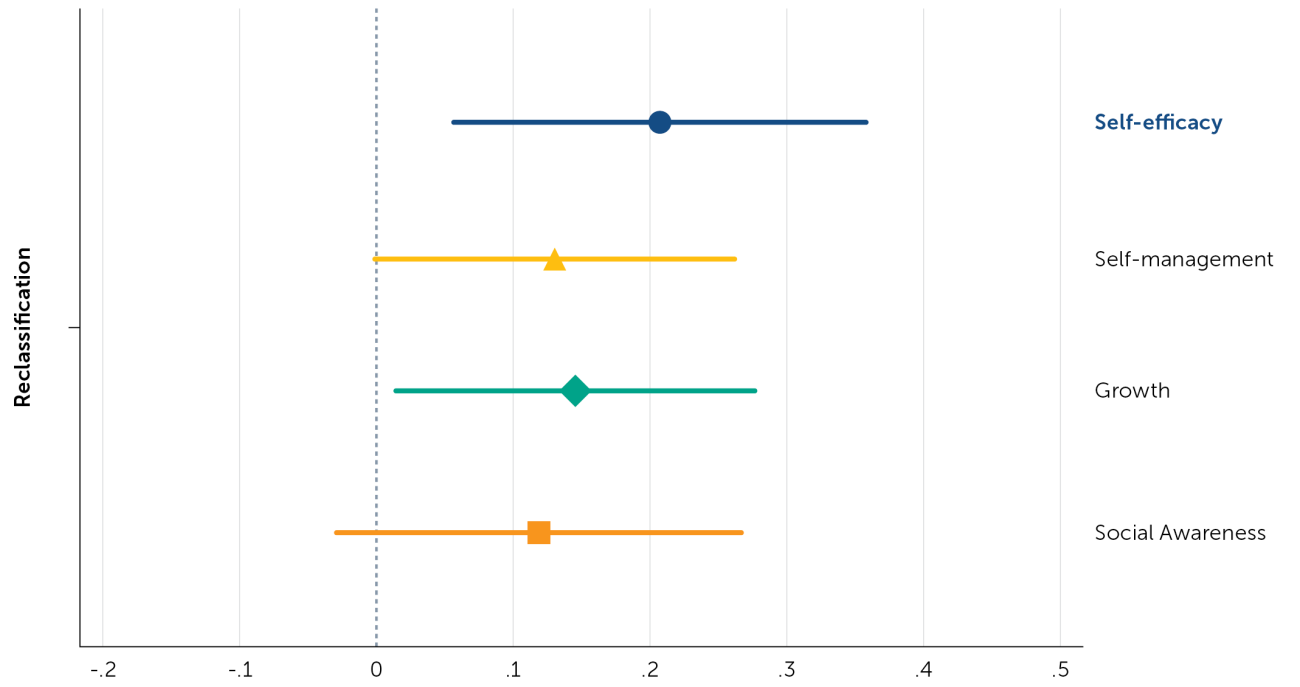 We found that estimates of the impact of reclassification on the four SEL measures remained similar even when examining the impact of reclassification by subgroups (Figure 2). Generally, increases in self-efficacy appear similar upon reclassification for students regardless of eligibility for free or reduced-price school lunch (see Table 2 for estimates). However, female students and students who are reclassified in the elementary school grades appear to manifest greater increases in self-efficacy relative to their peers, a notable finding given prior descriptive evidence that female students in the specific elementary school grades studied (fourth to fifth grades) typically experience a decline in academic self-efficacy.10

Figure 2. Impact of Reclassification on Self-Efficacy by Subgroup 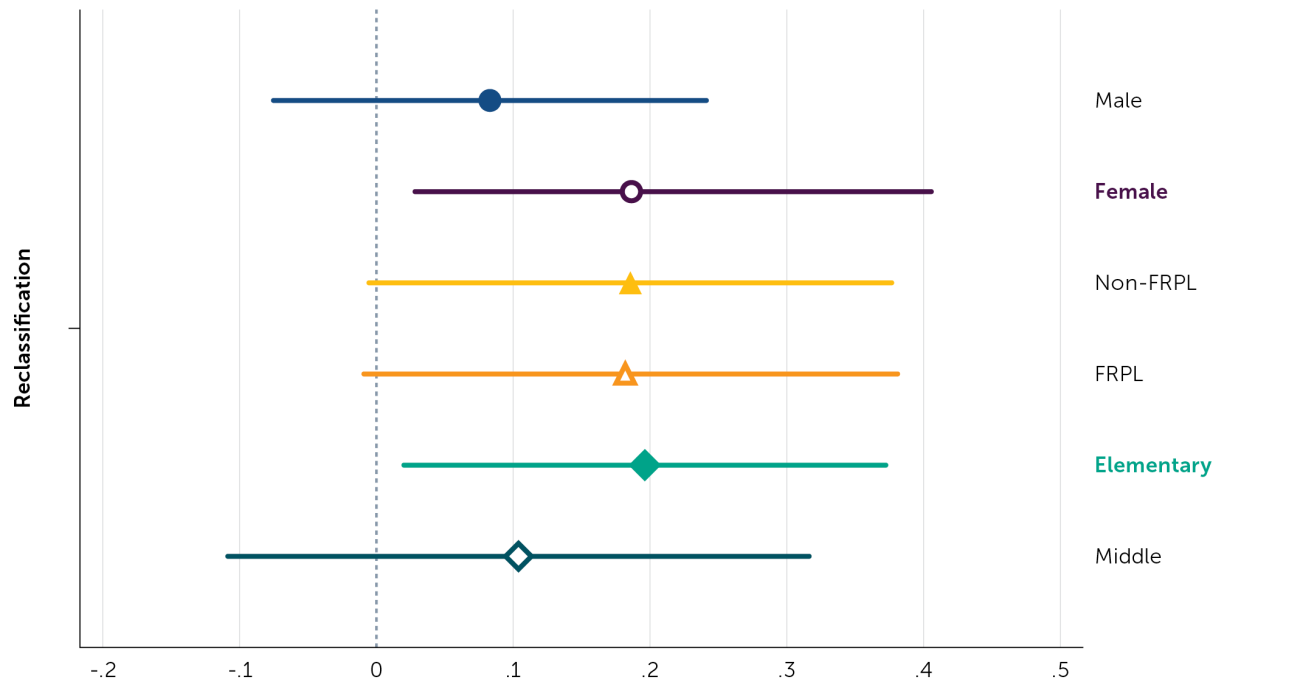 Note. The points and lines represent beta coefficients and 95 percent confidence intervals, respectively, of estimates from regression models predicting the impact of reclassification on each SEL construct. Analysis consisted of separate regression models for each subgroup. FRPL = free or reduced-price lunch.

Table 2. Impact of Reclassification on Self-Efficacy Across Subgroups

Note. Robust standard errors are given in parentheses. Each coefficient represents a separate two-stage least squares regression. F statistics are reported from the first stage. Sample sizes (N) are the same between the first and second stage. Other coefficients are omitted from display. All coefficients report impact at the optimal bandwidth. FRPL = free or reduced-price lunch.
+p < 0.10. *p < 0.05. **p < 0.01. ***p < 0.001.

Although these findings are highly contextualized—that is, they may only apply to students in these districts during the years studied who scored at the threshold for reclassification—they nonetheless provide plausibly causal evidence that reclassification can affect outcomes beyond achievement shown to be vital to long-term academic success.

Several mechanisms could be driving potential effects of reclassification on academic self-efficacy for ELs. First, extant literature on the “subtractive schooling” environment11 into which ELs are placed suggests the EL label can be stigmatizing. Although ELs possess assets such as bilingualism and “cultural funds of knowledge,"12 education systems define and distinctively label them by their lack of English proficiency, which can affect the way ELs perceive and believe in their academic capacities.13 Second, ELs’ academic self-beliefs may be influenced by the inequitable learning environments they can be placed in, as required EL coursework can often supplant enrollment in other core subjects or otherwise exclude them from more rigorous coursework.14 Third, prior studies suggest that ELs perceive that their teachers and families have lower expectations of them than of their non-EL peers.15

These results suggest that some aspect of reclassification—whether that is the removal of the EL label, the change to an environment with higher academic expectations and standards, the combination of these factors, or some other mechanism entirely—can matter meaningfully for supporting ELs’ beliefs and attitudes about academic success. If reclassification can positively affect self-efficacy in certain settings (as it appears to in ours), then educators may wish to investigate and address sources of lower self-efficacy among ELs (e.g., identifying SEL programs or interventions that can increase outcomes like self-efficacy among students who have not yet been reclassified). Further research on whether reclassification affects self-efficacy among ELs receiving different support service settings (e.g., bilingual education, sheltered instruction) can also help disentangle the mechanism through which SEL outcomes change for this student group and how much they are affected by instructional approach.

Results also have implications for EL policy. Policymakers may look at these results and be tempted to conclude that ELs will benefit by having reclassification criteria lowered such that students become reclassified sooner and, potentially, see an earlier boost in constructs like self-efficacy. However, such an approach could have unintended consequences. Specifically, if students are reclassified before being ready academically, then less stringent criteria could undermine the very self-efficacy that such a policy is meant to improve. Therefore, in addition to keeping in mind contextual differences, policymakers should also carefully monitor how any changes to reclassification policies based in part on SEL findings affect academic outcomes. If nothing else, our results strongly suggest that SEL should be monitored when reclassifying ELs and should be factored into decisions around criteria for reclassification.