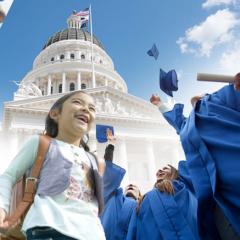 A highlight of the 2020 PACE Annual Conference on February 7 in Sacramento was the lunchtime programming: a first look at the results of the latest PACE/USC Rossier Poll. The annual poll, administered online to a state-representative sample of California voters, covers a wide range of state and national education-relevant issues. USC Rossier School of Education Dean Karen Symms Gallagher underscored the importance of the poll for California policy, as a tool for “shining a light on what voters tell us matters to them.” USC Associate Professor of Education Morgan Polikoff presented topline results from the poll, and a panel of education experts from across California were on hand to field audience questions after Dr. Polikoff’s presentation. (The panel included UC Davis Professor of Education Policy Michal Kurlaender and USC Professor of Education Policy Julie Marsh as well as Dean Gallagher and Dr. Polikoff, and was moderated by PACE Executive Director Heather Hough.)

A second finding centered voters’ thoughts on teacher shortages and salaries. California voters favor increasing teacher salaries, and want to accomplish this by increasing salaries across the board as opposed to, for example, increasing new teachers’ starting pay. Although reducing the teacher shortage was voters’ third-highest priority when asked to rank twelve hot-button educational issues, there was a large increase over last year in the proportion of voters who say they would discourage a child from becoming a teacher, with low teaching salaries their most frequently-cited reason for discouraging. Asked by an audience member whether she saw effects of this discouragement in applications to the education school, Dean Gallagher clarified that she has seen a decline in students taking a “traditional, undergraduate path” to teaching, but has seen increases in the number of career switchers into teaching. Gallagher surmised that perhaps these applicants’ parents had pushed them not to teach after college, but that they realized that teaching was their career of choice after five or ten years in a different field.

California voters ranked college affordability as their second-most important educational issue. Despite placing heavy importance on higher education, California voters overwhelmingly perceive it to be an unfair system, with 60% believing that admission to private institutions is “generally stacked in favor of wealthy students” and 40% believing the same about public four-year institutions, compared to 19% and 34%, respectively, who see the admissions processes as “generally fair.” Perhaps unsurprisingly, then, California voters are largely supportive of admissions preferences for members of traditionally underrepresented groups, but exhibited five- to ten-percentage point declines in support for admissions preferences for elite athletes and children of alumni or donors compared to last year’s poll. Dr. Polikoff noted these declines might be an effect of the recent Operation Varsity Blues scandal.

For the second year in a row, California voters’ top-ranked educational issue was reducing gun violence in schools, with 59% of voters assigning it the highest possible ranking. Despite enjoying strong support from the Governor’s office, increasing access to early education ranked tenth out of the twelve issues presented in the poll. (The lowest-ranked issue was increasing teacher diversity, noted Dean Gallagher with dismay.)

Finally, California voters generally favor increasing school funding, though the sentiment varied by political party: 68% of Democrats favor increasing school funding (16% oppose it) and 42% of Republicans favor increasing school funding (39% oppose it). These figures represent small declines in support for school funding increases among members of both parties compared to last year. To finance this increased funding, voters strongly support the bond measure appearing on the March ballot, but support for the “split roll” ballot measure is more contentious. Responding to a later audience question about the likelihood of the split roll measure’s passage, Dr. Polikoff said that the poll data should concern split roll supporters, but that it enjoys widespread support amongst Democrats, who are sure to be a large proportion of voters in March. Dr. Marsh then explained that although there is strong support for increasing school funding and teacher salaries, the poll shows little agreement about how to raise the revenue necessary for such changes. Given the importance of taxes as an issue for voters, it is unclear to what extent additional investment into public education would find support in the voting booth.

After presenting and clarifying their thoughts on the topline results, the panel were asked to comment on the extent to which the recently-released governor’s budget reflects voters’ priorities, as revealed in the poll. Dr. Kurlaender noted that the budget gives strong support to community colleges, but cited voters’ desire for greater accessibility and affordability in higher education overall to call for greater support to the UC and CSU systems as well. Dean Gallagher added that supporting higher education by providing students funding to attend the school of their choice (as opposed to providing funding directly to colleges, as in the current budget) would be a boon for tuition-driven private institutions as well. Dr. Marsh analyzed the governor’s $900 million commitment to teacher recruitment and training as a miss: the poll indicates that it is low salaries that preclude prospective teachers from entering the teaching force, so until salaries are higher, resources spent recruiting teachers may not be as effective as they could be.

For more detail on the issues discussed in this summary and many others, take a look at the full results of the 2020 PACE/USC Rossier Poll, available at https://edpolicyinca.org/publications/pace-and-usc-rossier-polls-2020.

Daniel Silver is a PhD candidate in K-12 education policy at the University of Southern California’s Rossier School of Education.